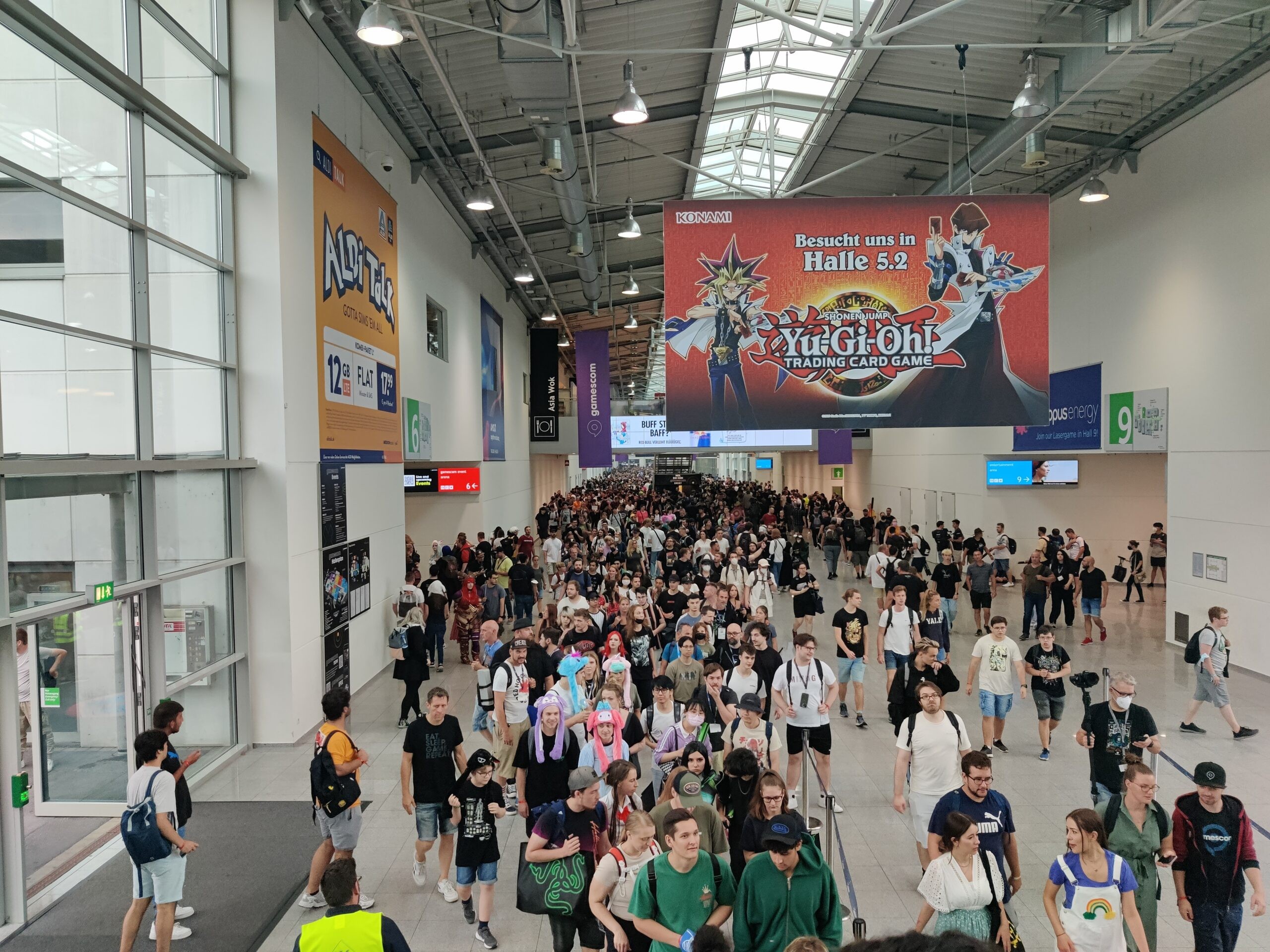 We decided to go to GamesCom this year at relatively short notice. This was such a typical RxB impulse decision in a meeting before we all went on vacation. Accordingly, the planning was chaotic. But the trip itself was very nice, which is why we want to capture it in a little travelogue. GamesCom is already a highlight.

Fortunately, we were able to sleep at Chris's, the brother of a good friend. Not only was it much cheaper than any other accommodation available in Cologne, it was also much nicer! After our arrival in Nippes well after dark on Tuesday evening, he sent us straight 'em Golde Kappes' to top up the batteries with Kölsch, and on the way there, with something edible. Michi and Richard did not yet know how the Kölsch works, but were positively taken with the concept.

The next morning we had a relatively early appointment at the fair. Just the way you do it. "Unfortunately" we were a bit late with our decision and had decided to go to the fair without a pitch deck in order to have a stress-free look at the whole thing. So the scheduling situation was, shall we say, tolerable. Nevertheless, we were able to meet many people over the entire trade fair whom we probably would not have met if we had had a full schedule, and in retrospect we are very satisfied with our decision.

Wednesday belatedly bears the label "discovery day". Just like the first time we went to the playground, we walked around the fair somewhat haphazardly and got lost countless times thanks to the miserable Gamescom app, until we realized that the analog plans were much better for orientation. On the way, we met our friends from Moonlit Monitors and Allison Yangjing, whose game "Back to the Dawn" was on display at the Indie Arena Booth (IAB). The Indie Area and the Indie Arena Booth also became something like our home over the three days. Everything is so normal and beautiful there that we didn't feel the need to visit the other halls of the Entertainment Area at first. On Wednesday evening we met the other studios from the Bayreuth Accelerator Pitch, where Zenker, Paul and Micha were in spring.

We started Thursday with a walk through the market around the corner and ended up rather unexpectedly in a Turkish restaurant for breakfast. The time there was perfect to regenerate a bit more and prepare for the upcoming meeting (not at the fair).

Once we arrived at the show, we immediately had an appointment in the business area with Jan Binsmaier, who is mentoring us this year and helping us figure out how to achieve our goals with his perspective from a major European publisher. In general, GamesCom has been very good at sharpening our focus on what we want and what we don't want. We spent the evening with Allison and her colleagues from the fair, as well as Chrissi, our host at the "Three Kingdoms", a Chinese restaurant in the old town. Super spicy, but also super tasty. Allison, as she did at our last meal in Leipzig, did the ordering and put some nice challenges in front of us.

Somewhere here we were almost struck by the fact that the trip was almost over. Friday 11 am, we had an appointment with Friedrich Lüder, whom we could see regularly in Leipzig, but just as regularly miss. This meeting has definitely set standards. Friedrich took us to the "Game" booth, where we were exposed to a cheerful coming and going, which washed up new conversation partners again and again. That was nice.

This was followed by a short trip to the entertainment area beyond Hall 10.2. and what can we say... hui. The mask rate was rather low anyway, although the IAB also caught the eye positively here. We then felt completely out of place in the crowds at the fair. As if Covid-19 had never existed. Also: the usual gigantomania of big publishers, who, despite all the cancellations and lower budgets, set up huge booths that ultimately didn't offer much more than long queues, and noise about... not quite as much. There was also surprisingly little catering with reasonable prices and hardly any areas where visitors could relax from the hustle and bustle of the noisy halls. Then in the outdoor areas, people just sat on the raw concrete.

Of course, as first-timers, we may not have a clue about the whole thing and it's all just part of a successful visit to the show. We were a bit surprised how little such a consumer trade show does for the visitors in the end.

For us, however, the trip was completely worth it. We met a lot of people and gathered a lot of impressions. It starts with the Kölsch in the pub and ends in the last but one corner of the entertainment area. Next time we will hopefully be there with our own booth! Until then!